The liberal arts education is a quintessentially western concept that has been continuously in practice and variously retrofitted in the western world for the past 2000 years. Throughout that measure of time, people have drawn from the culture of ancient Greece and Rome models and ideas ranging from architectural design and literary forms to legal systems and democracy. The influence of the classical world on western culture has never lapsed; predating Christianity, with the latter as a close second, classical Greece is the single most powerful and ubiquitous presence in the western hemisphere. 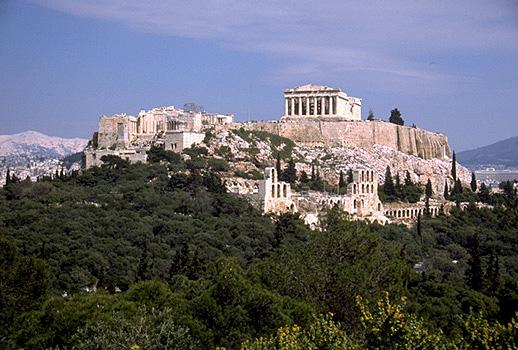 The acropolis of Athens, Greece, where the Parthenon (completed in 438 BCE) continues to symbolize the ideals of a civilization

The classical Greeks (whose organized presence in the ancient world extended from approximately the 7th century BCE to the 5th century CE) prioritized learning and development of the intellect; they created an area of study devoted to aesthetics, and they prized physical health achieved through disciplined athletic practice. They established a successful democracy and government informed by public representation (not without flaws, but look at our own). In order to understand the social context in which the concept of the liberal arts education emerged, we must acknowledge the indecent and ancient practice of commodifying human beings.

The Greeks and Romans cultivated slavery, an institution fully formed in other areas of the world long before Homer. One scholar estimates that during the 6th and 5th centuries BCE, possibly 40% of the population of Athens–icon of the glory that was Greece–were slaves. The Romans continued slavery and maintained their international economy on the foundation of this involuntary workforce. It is estimated that one quarter of the population of Ancient Rome lived as slaves (Keith Bradley, Slavery and Society at Rome, Cambridge,1994).

Running parallel to its system of slavery, classical Greece produced a program of education that remains perhaps its greatest contribution to western civilization. The Greeks shaped the belief that an educated citizenry would ensure a prosperous and orderly city, nation, or empire. Citizens, in this case, were free–or liberal (in Latin, “liber” means free)–individuals as distinct from enslaved individuals. The Greeks organized knowledge into areas of study, the mastery of which would produce an ideal citizen, a person of intelligence, practiced reasoning skills, and sound moral judgment. The Greek philosophers (literally, lovers of wisdom) described a person thus educated in the “arts” appropriate to a free or liberal citizen as being virtuous. The artes liberales or liberalia studia initially consisted of grammar, rhetoric, and logic. Students learned to sort out and evaluate ideas both written and spoken and to craft effective arguments of their own; they were trained to orally and publicly present and defend their arguments and to write them in conventionally correct and persuasive prose.

As they did with Greek culture generally, the Romans sustained and expanded the “liberal arts” system of education, and by the 5th century CE, Martianus Capella outlined the seven liberal arts as grammar, dialectic, rhetoric, geometry, arithmetic, astronomy, and music. Because the Greeks had applied the term ἐγκύκλιος παιδεία (transliterated as enkyklios paideia), meaning the circular or iterative education of a child, the seven categories were often depicted in a circe.

During the historical/cultural/political elision of the fall of Rome and the emergence of the Christian Church, the liberal arts education remained intact, although its highest level of administration shifted to the Vatican. The great Medieval universities of western Europe, initially underwritten by the Church, organized the system into two mandatory tracks: the trivium (grammar, rhetoric, logic) and the quadrivium (arithmetic, geometry, astronomy, music)–respectively, the study of words and the study of numbers. The successful completion of this program prepared one to begin training for a profession (originally in a limited array of fields: law, medicine, or theology) or to ascend to an even higher level of study–philosophy. This model obtains today; a student acquires a rich and interdisciplinary (connected or circular) foundational education–the bachelor’s degree, then moves into training for a specific profession or within a specific discipline–professional and master’s degrees, or continues to advanced study of a particular subject, a study of its philosophy–today’s doctoral degree (the “Ph” part of the “PhD” referring to philosophy).

There’s a regrettable irony in the legacy of the liberal arts education: the concept as developed by the Greeks, adopted and expanded by the Romans, and continuously maintained in the west ever since blithely carries a rather oxymoronic nomenclature: this brand of education was available only to the “liberal,” the free, the people who were not slaves. Today’s use of the term “liberal” implies an open, inclusive, somewhat generous quality. But its original use was exclusive and socially segregationist.

The designation “liberal arts college” is inherently American; until the 19th century European universities were, by default, liberal arts schools. While colleges and universities in the United States are often distinguished by their concentration in specific disciplines or by an emphasis on undergraduate-level teaching or primarily graduate-level research, most institutions of higher learning in the United States preserve some form of the liberal arts education; the “gen. ed.” (general education) classes required of undergraduate students at American universities are, by any other name, an array of courses that engages students with the cross-discipline format of the ancient liberal arts while they simultaneously “major” in a particular subject. American schools that place the liberal arts program not only as the core of the undergraduate degree, but that also preserve the Socratic pedagogy (which doesn’t translate well to the large university lecture hall of 100 or more students) and spirit of the classical format are called “liberal arts” schools.

During the final decade of the 20th century, European universities began to reclaim the liberal arts program. Many schools in the United Kingdom, in Ireland, Germany, the Netherlands, and Sweden have established special degrees as well as entire colleges designed according to the traditional liberal arts curriculum. In 2005, Ilia State University, in the Republic of Georgia, adopted a liberal arts program.

Owing to significant changes in global economies, international trade, and digital technologies, the liberal arts education is more relevant now, in its third millennium, than ever before.

One thought on “The liberal arts education”